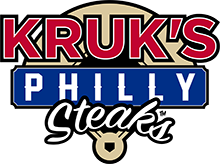 When Phillies legend John Kruk moved to Naples in 2010, he was craving a taste of the City of Brotherly Love. Across the U.S., from stadium to stadium, no one could make a Philly-authentic, Kruk-approved, cheesesteak. Finally in 2015, Kruk decided he should stop looking and start his own shop.

Kruk’s uses classic ingredients found in steak shops throughout the Delaware Valley, including bread baked and shipped from Philly and the traditional “wiz” cheese. Menu specialties even spin off the classics with local favorites like chicken cheesesteak and hot Italian pork roast sandwiches.

So whether you’re a Northeast transplant craving a taste of Philly, or from the Southeast and have never experienced the wiz-glory of a cheesesteak, Kruk’s is firing up the grill and slicing the Ribeye for you.

It’s our intent to bring the best of Philadelphia to all of our customers daily. In each and every location, we use the best ingredients to create our cheesesteaks — from the bread, to highest grade of rib eye, to the freshest produce. Every cheesesteak made by a Kruk’s Philly Steaks employee is a culinary celebration only to be shared with those who won’t judge the facial expressions of euphoria and delight that each bite brings. Yo, don’t forget we do Chicken, Pork and Hoagies, too!

John Kruk played professional baseball from 1986 to 1995, for the San Diego Padres, Philadelphia Phillies, and Chicago White Sox. After his playing career, John Kruk appeared on Fox Sports (Best Damn Sports Show), then ESPN Baseball Tonight, and he can currently be seen on NBC Sports Philly as a color announcer for the Philadelphia Phillies. The former three-time All-Star outfielder/first baseman retired in 1995 after a 10-year major league career in which he hit for a .300 average, with 592 runs batted in and 100 home runs.

It was his contagious personality as much as his statistics that helped turn the Phillies around from last place in 1992 to first place in 1993. Teamed with other hard-nosed players like Lenny Dykstra, Darren Daulton and Dave Hollins, John Kruk led the “Fighting Phils” to the 1993 World Series. The team ultimately lost in six games to the Toronto Blue Jays, but Kruk batted .348 with four RBIs in the cause.

In one of the most bizarre retirements in the sport, John Kruk simply walked off the field after singling in the top of the first inning off Scott Erickson on July 30, 1995 in Baltimore. After the portly ballplayer hit the single, he simply said goodbye to his teammates in the dugout and left Camden Yards with his family. After his baseball career came to an end, John Kruk appeared as a baseball teammate of Wesley Snipes in The Fan with Robert DeNiro.

What prompted Kruk to think about getting into the food business? Just read this quote and you’ll get Kruky:

“Let’s be honest. We’re losing by eight runs, and all I’m thinking about at that point is getting back to the hotel by midnight because that’s when room service closes. All of a sudden, we start getting hits and more hits, and I’m saying, ‘I’m not going to make it.’ If you’re not going to get room service you might as well win.”